Santa Wasn't the Only Thing Coming Down the Chimney

Faithful blog followers may remember that I discovered, with the strange early March 2009 snowfall, that there was a problem with water getting in and running down the chimney of the new fireplace in the kitchen area. At that time, Pete LaRoque (my general contractor) said it turned out the counter-flashing had never been installed. So he fixed it.

But then Winston-Salem had a lot of rain in early June 2009, and darned if that chimney wasn't leaking again (there's a picture with the blog entry found with this link). So repairs were done again, I suppose. In this case, Pete said the counter-flashing was installed but had not been sealed.

Then came the remnants of Hurricane Ida around Veteran's Day 2009, and here's what resulted: 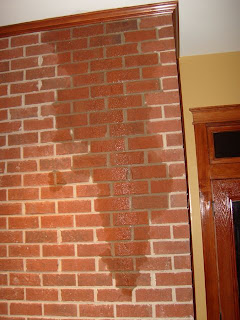 I called Pete, who could not fix it in the rain, but he promised to do so the following Saturday. (I was working in Richmond so I wasn't home for his visit to once again repair the leaking roof.) 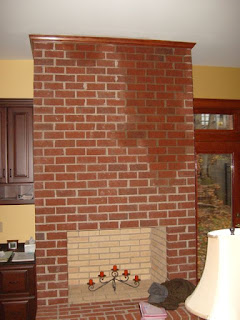 Ah, but guess what came down the chimney on Christmas Day 2009...Yes, the roof was leaking once again. So now I'm not sure why it continues to be a problem, but we'll certainly need to see about getting it fixed. At this point, I think you all can understand my worry and my concern. There is still discolored sheetrock where it meets the brick of the chimney, and the dousing it got in November made it very, very soaked. I haven't checked out the insulation around it in the attic but will certainly be looking into that as well.
Posted by Ray at 3:12 PM No comments:

Unusual for us to have a winter weather event of any note in December. At best, it's going to be an inconvenient icing or perhaps a small accumulation of sleet. The snow system that dumped two feet of snow on my friends in Charlottesville, VA, managed to fall long and hard and look really pretty in downtown Winston-Salem, but I think officially we only got maybe four inches. Traces of it are still hanging around, mind you, over two weeks later (it's been too darned cold in this town so far this winter). 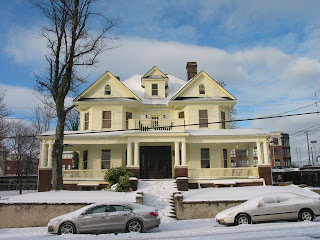 But hey: it was enough to gather up on a roasting pan placed on the upstairs balcony, and I definitely whipped up some snow cream (or, as some call it who were raised elsewhere: "snow ice cream"). Here's a picture of the adorable Amy Williamson enjoying a bowl of it while cuddled up in my Aunt Lee's afghan on the hearth of the fireplace. 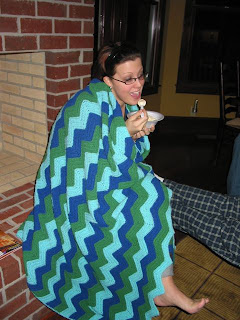 One heckuva hailstorm suddenly blew up on downtown Winston-Salem at the end of September, before I'd had a chance to get the "movie screen" down from the outdoor theatre set-up. It played holy heck with the support poles, bending them back almost 90 degrees. This came into play later in the fall when the remnants of Hurricane Ida blew through, because it took the whole set-up and laid it down on the parking area. (I've got to do something about that, too.) 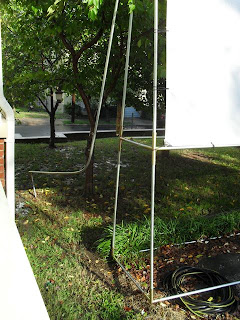 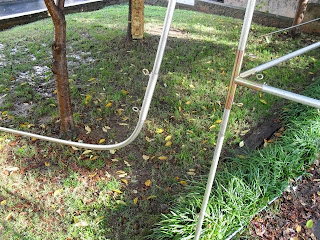 Here's an update on the update: an ambulance service has taken up tenancy in the building behind the house, and they've put up a bright new security lot where their ambulances park (with the tell-tale "beep-beep-beep" every morning at 7 am as they back into place). Ordinarily, I might be pleased to have the extra light on my vehicles, but there was also the unpleasant discovery with the October movie night that the light spills badly onto the movie screen. That's not so good. 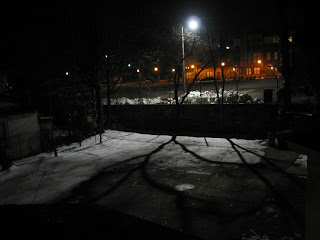 At the end of October, the gutter installation crew finally came back to make some adjustments. There'd been problems with overflow, particularly coming off the valleys where the one-story kitchen addition and the new second story spaces converge. There had also been a seam that was not sealed. 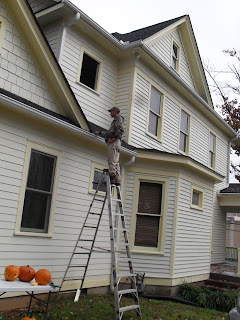 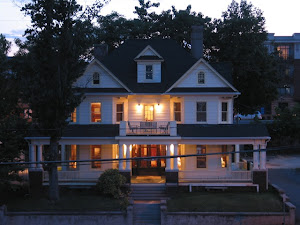